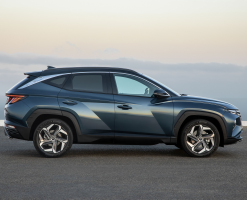 Owners of the 3rd generation Tucson (2016-2021) are being urged to keep their parked vehicles away from anything that can burn until they have a fuse in the antilock braking system (ABS) replaced. If you're wondering if they really mean that, yes. Yes they do Multiple SUVs have caught on fire, both while parked and in motion, due to a short circuit in the ABS.

An investigation found that the fires may not occur if the operating current in the ABS module traveled through a lower amperage fuse so they want to swap the system's current 40-amp fuse for a 25-amp version. I'd personally like a little more certainty than "may not occur," but that's just me.