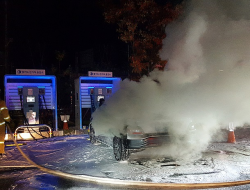 Hyundai thought it could manage EV battery fires with some software updates, but then one of the "repaired" vehicles caught on fire. So now the company finds itself staring down the barrel of an all-out battery replacement program for 76,000 Kona EVs worldwide (that's a $900 million dollar barrel, FWIW).

Also included are some Ioniq EVs and Electric City buses that have also run the risk of being torched. The recall will begin in South Korea before expanding to other countries. There is no official word on a North American recall, but it's only a matter of time.