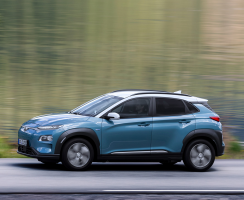 Hyundai is recalling 11,000 Kona Electric SUVs and asking the owners to park outside after reports of 13 battery fires. Hyundai believes an electrical short-circuit is being triggered in the lithium-ion batteries as they charge and approach 100%. Most of the fires happened while the SUVs were parked and charging. While the root cause is still under investigation, electrical deficiencies in the LG batteries or software issues in the battery management software are likely to blame.

More About This Recall ∞